Showing posts from March, 2018
Show all

Good Friday: Meditation on the Last Seven Words of Jesus 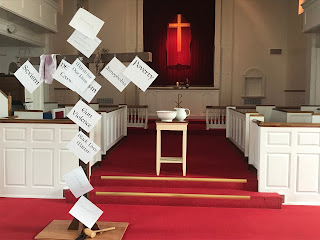 Meditation on The Traditional Last Seven Words of Jesus, with scripture references from the Gospel of John
Begins with singing this slowly twice:


“Father, forgive them, for they know not what they do.” Pilate brought Jesus outside and sat on the judge's bench at a place called The Stone Pavement, or in Hebrew Gabbatha. Now it was the day of Preparation for the Passover; and it was about noon. He said to the Jews, "Here is your King!" They cried out, "Away with him! Away with him! Crucify him!" Pilate asked them, "Shall I crucify your King?" The chief priests answered, "We have no king but the emperor." Then Pilate handed Jesus over to them to be crucified.
How often do human beings break God’s heart? Surely God must weep over the refugee crisis in this world and all the ways and means that human beings turn other people into objects, subhumans, demeaning and diminishing others? God weeps over those who are dying from war, famine, cruelty, greed…
Post a Comment
Read more

- March 11, 2018
The summer I was 18 years old I was entering my second year of college. My girlfriends and I had rented a house together. This was in southern Illinois, a beautiful place where the glaciers ended leaving high bluffs and many deep lakes. The weather in southern Illinois during the summer is hot and very humid and so my girlfriends and I would take every opportunity we could to go swimming. We'd find someone with a car to drive us out to the rural area where we'd park the car and hike back into one of the lakes. We'd walk through fields and woods and inevitably run into rattle snakes, who were sunning themselves on rocks. The snakes announced themselves with the rattle and then slithered off into hiding. Then we'd hike down out of the woods and onto the beach front of the lake. The lake was beautiful and very inviting on a hot day. However, it was also full of water moccasins. Yes, we went swimming in a lake with water moccasins. Granted, we threw rocks into the water to…
Post a Comment
Read more
More posts