Showing posts from May, 2008
Show all

Another day, another game!

1.) What first tells you that Summer is here?
Well, in Chicago it was easy - the first hot and humid day. It usually happened in late May or early June. The temps would go from moderate to MUCK in a day. Hot and humid, dripping kind of weather. Here in the SW it has been summer like for months. But now I guess the real summer is about to hit. The forecast predicts 100+ temps for the next 10 days. heh...I just laugh when I see it. BRING IT ON! I say. Yes. I know it will be tiresome and I will grow to dislike the constant heat and need to use AC...but, it will never be as bad as that humidity. And it does cool off at night. And I have a pool.

So, I think what really tells me its summer is the ability to swim outside every day. That and the fact that I am using artificial tanners to look like I actually spend time in the sun. Which I do, but with major sunblock plus subtle color... The other thing that tells me its summ…
7 comments
Read more

- May 28, 2008
Yesterday, after the Cooper's Hawk caught breakfast, probably in my backyard, I continued to watch the birds at the feeders. They slowly returned and before long the feeders were filled with birds. They'd fly in to the feeders and then out and off. All of a sudden one small yellow finch flew into our sliding glass door. It lay on the ground, stunned. My cat was sooo excited and wanted out. My dog was glued to the screen. I moved the cat and dog and went out to check on the bird. It was lifeless. I felt so sad. Again, trying to feed birds had cost one it's life. So I used a small shovel and scooped it up and laid it under a tree behind my fence. When I went back to look a few minutes later the bird was gone. Gone. I have no idea where or how or why. Maybe I just couldn't find it under the tree. Maybe something took it. Maybe it flew off. Who knows.

Later I saw my cat and dog looking out the other screen door, the front door. This screen door is heavy duty, a security doo…
11 comments
Read more

- May 21, 2008
So last night my husband, son, and I had a lovely night. We went out for pizza and then came home and swam in our pool under the stars. We tried really hard to get the dogs in the pool - but no way! Still the rest of us had a really nice night. The water was wonderful and the moon was full, or mostly full. It was great.

We slept with our bedroom door open to the outside because we have a security screen with a deadbolt lock. It was a nice night for sleeping following a great night of family time.

Then today. Oh my. The temperature dropped a lot, 92 degrees. But it felt much cooler because of the wind. And I MEAN WIND! WOW. I think we had sustained winds of 20 or 30 miles an hour and frequent gusts of 50 miles per hour. The sky filled with dust. The mountains were obscurred. Breathing was awful. And the noise was relentless. A constant humming and clanking of wind through the house. My nerves were totally on edge. Weird.

Now at last the wind has died down, the air is cool, the crickets ar…
9 comments
Read more

- May 20, 2008
Yesterday the temperature reached 101. We did not turn on the AC because I hate it. We sat outside in the shade and the breeze and hung out in out pool. Last night it cooled off nicely and we slept well. But today, since I spent the day in an AC office I suggested that my husband and son not suffer and turn on the AC if they wanted too. It is after all 104 outside. And, the windshield on my car cracked...I think from the heat...Yeah, it's hot. They say the entire month of June is usually in 100's. Guess I'll spend a lot of time in the pool...
11 comments
Read more

God Is More Mystery than Known...

I recently renewed my subscription to the NY Times, a paper I love to receive on Sunday and spend Monday, my day off reading. One of my favorite articles, found in the NY Times Magazine, is “On Language,” written by William Safire. Last Sunday he wrote a reflection on a new word that has come into common usuage, that word - “wackadoodle.”

Here is part of what Safire said, “In a friendly conversation with Bill Moyers of the Public Broadcasting Service….the Rev. Jeremiah Wright, Jr. noted that he had been ‘painted as some sort of fanatic’ and called a wackadoodle by someone he referred to in sarcasm as ‘the learned journalist from the New York Times.’ In …March…my columnist colleague Maureen Dowd…wrote, ‘Hillary got a boost from the wackadoodle Jeremiah Wright.’

Safire goes on to write, “In 1995, The Philadelphia Inquirer quoted a state legislator, David Heckler, saying that those wanting to repeal a firearms law were only a ‘few wackad…
9 comments
Read more 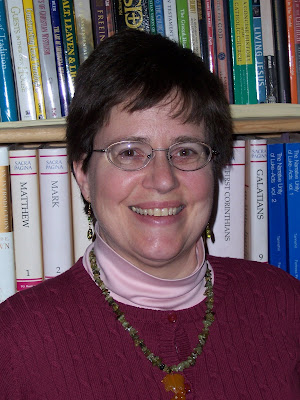 What a week. Here is a photo montage of some of my week...


Janine wrote a wonderful reflection for the Feminist Theology blog. I've managed this blog for about 6 months, it is cosponsored by the Office of Women's Ministry through the Episcopal Church. You can read Janine's reflection here.

Cactus are still blooming - the desert is soooo beautiful.

The road runners were out yesterday running around my front yard trying to catch dinner...I think they managed to get about five of the baby quail (since they run through my yard and today there are about five fewer babies...sigh...sad...)...


my daughter and Ryan heading off to the black tie ball where he received several medals in honor of his time served in combat while deployed for 16 months to Afghanistan. They make a nice couple, don't you think? Oh, and then add to that, Ryan injured himself jumping out of a plane Thursday morning (he's 82nd airborne) and had to go to the hos…
12 comments
Read more

A Spirit of Generosity

- May 10, 2008
The family arrived on a warm June day, a mother, grandmother, and five children ranging in ages from 17 to 3. As they scrambled off the van it was apparent just how tired they were. Some time ago this family had traveled from a refugee camp in Cameroon to Darfur, Sudan. There they caught a plane which flew them to Paris, France, and then to the United States. The littlest ones were teary-eyed and clingy, hanging on to the bone thin hand of the white haired grandmother. The mother and older children had that glazed look that comes from bone weary fatigue. This family, refugees from war torn Rwanda, were being placed by the local resettlement agency. A house had been acquired but renovations to ready the house for this family were still in progress. So for the next few days the family would live in the church.

The church had spare rooms not being used over the summer, rooms that had been hastily converted from Sunday school rooms into bedrooms and a living room. Downstairs was a full ki…
7 comments
Read more

- May 08, 2008
I had my first phone conversation with the Consultant who I will call Mr. Fabulous (of Mr. Fab for short). I called because he lives about 1800 miles away. I called to set up our first "Official" phone meeting (which we scheduled for next week). In this initial phone conversation he invited me to give him some history. Well, I said, I've come from a small church to a large church. I've come from an all volunteer staff (or at least that's what it was for the last little while I worked there) and into a paid staff of 6 and a 8 volunteers. I've left a place where I was for 10 years and knew everyone to a place where I know no one...and I've been here 8 weeks.

None of that is the issue. The issue is something else....it's some interpersonal stuff...the kind of stuff that happens all the time in church dynamics. And, while I understand it, I really want a third, un-related, entity to process with, for perspective. To keep ME healthy. To keep ME thinking cle…
14 comments
Read more

- May 04, 2008
Seems like every week is a long week these days. Not bad. (Well some of them have been bad, but not most of them). It's all part of the learning curve that comes with being new in an area and new to a parish community. Everything is new. And with that learning curve of newness comes a level of fatigue and some anxiety. The anxiety is mostly about not knowing people, so not knowing what is meant by one thing or another, and not knowing who the safe people are that I can speak to and trust that they will hold my questions in confidence and also answer truthfully.

There are a lot of weird dynamics going on. I can't really say what - but they are mostly interpersonal. I'm hiring a consultant - an unrelated church professional to talk things through with. And I'm reading a lot of books on this particular kind of leadership issue.

Yesterday I drove my son to the BIG BIG city to the north, a city that feels like where we came from, except for the mountains. It was a three hour…
19 comments
Read more
More posts