This year in the USA, Monday, May 25th, was Memorial Day. It is the annual day of remembering those who have died fighting in wars to uphold the freedom and values this country espouses.  This annual day of remembrance began around 1866, the year after the Civil War ended. Initially cities around the country chose different days and different ways to remember those who had died in the Civil War. Then in 1968 after people in this country had fought and died in WWI, WWII, and other wars, Congress passed the Uniform Holiday Act which established Memorial Day as the last Monday in May, creating a three day weekend to honor federal employees. Typically the day has been celebrated with patriotic parades and family picnics. It’s become the unofficial launch of summer.

However, this year  was different. No parades, and picnics were to be carefully constructed with some degree of social distancing. Also this year people in the USA are embroiled in conflict, due to the COVID-19 pandemic, between what the Federal Government claims and what state Governors have had to do on their own. Houses of worship including the many different Christian denominational leadership and congregations have had to figure out if and how to comply with state regulation against the ensuing pushback from citizens (or internet bots). What does it mean uphold the Christian value to love our neighbors? In many ways this has been a time of unity and strength, of a country and its citizens coming together to care for one another. Yet in other ways there are strategic efforts to further divide the people of this country through disinformation broadcast across the various social media platforms.

Curiously, what we are experiencing now mirrors in some ways  what was going on in this country in 1866. The Civil War ended about April 9, 1865. A week later President Lincoln was assassinated by John Wilkes Booth, who feared the loss of white supremacy. With the death of Lincoln, the Vice President, Andrew Johnson, was sworn into office. He quickly worked to dismantle all the work that had taken place under Lincoln, including undermining the 13th amendment, which abolished  slavery, with what became known as “Black Codes”. Congress enacted the 14th amendment in July 1868 in an effort to curtail the loss of rights that came under the leadership of Johnson. The 14th amendment enacts birthright citizenship and has figured large in many landmark cases like education rights, women’s healthcare,  and marriage equality. The fifteenth amendment came shortly thereafter, guaranteeing the right for all men to vote. (Women did not get the right to vote until the 19th amendment in 1920).

What I see happening in the USA today with Trump as President and the leadership of the GOP (and some Democrats) for the last fifty years, reflects what was happening in the late 1800’s. The struggle for the USA to define the Constitution’s principle value of equality in the pursuit of “liberty and justice for all,” remains a pendulum swing between only wealthy white men, or the more panoptic perspective that it means everyone.

Christianity in the USA has had a dominant voice for 500 years, beginning with the invasion of Christians under the Doctrine of Discovery, the papal bulls written by several popes in the late 15th and early 16th centuries. Christians took over lands that had historically belonged to indigenous peoples and set about “civilizing” the country. Other Christians came here seeking relief from religious persecution. Many other people have come here over the decades seeking freedom and opportunity, the hope for a better life for themselves and their families. People have fought and died for the primary values of freedom and equality and the pursuit of liberty and justice.

On this Memorial Day the struggle remains intense as states and cities, businesses and churches try to figure out how to survive while being “closed” and how to re-open safely. This is a time when we have the opportunity to rise to the occasion and lift up the values we claim as foundational principles of what it means to be citizens of the USA. We lean into our values of faith, whether Christian, Jewish, Muslim, Buddhist, or another faith tradition, which remind us that God values all life equally. Our efforts to live in such a way that we work for peace, and strive to do unto others as to ourselves, are efforts that can guide us into positions of living responsibly and faithfully.

To this end the scripture reading from 1 Peter on the 7th Sunday in Easter (May 24), is informative to guide and sustain us as we work against the prowling devil of inequalities that continue to tear us apart. In this reading the suffering of Christ, and thus our suffering too, is the challenge to overcome oppressive and suppressive systems in the world. Trusting that God has our back, is with us in our anxiety and fear, and in our efforts toward liberty and justice for all, we can find the stamina to continue the work that this Memorial Day honors and for which people lived, fought, and died for.

Crossposted on the RevGalBlogPal blog for "The Pastoral is Political" series 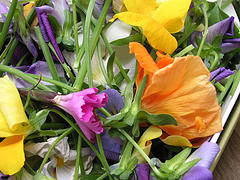 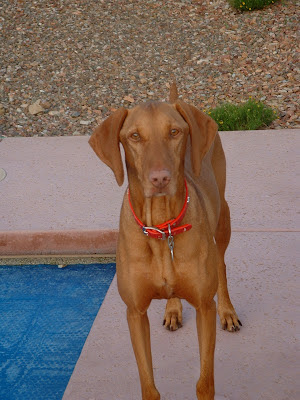 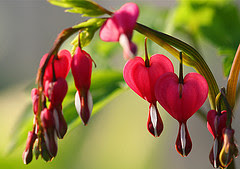 I know a bleeding-heart plant that has thrived
for sixty years if not more, and has never
missed a spring without rising and spreading
itself into a grassy bush, with many small red
hearts dangling. Don't you think that deserves
a little thought? The woman who planted it
has been gone for a long time, and everyone
who saw it in that time has also died or moved
away and so, like so many stories, this one can't
get finished properly. Most things that are
important, have you noticed, lack a certain
neatness. More delicious, anyway is to
remember my grandmother's pleasure when
the dissolve of winter was over and the green
knobs appeared and began to rise, and to cre-
ate their many hearts. One would say she was
a simple woman, made happy by simple
things. I think this was true. And more than
once, in my long life, I have wished to be her.
Read more